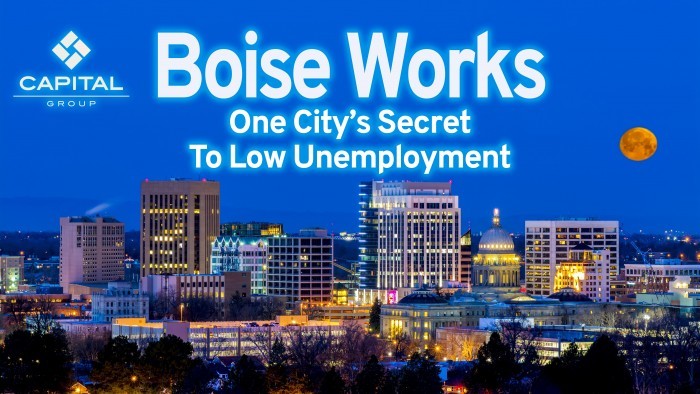 Looking for work, or want to start a business?  Consider Boise, Idaho.  Boise was just named one of the top 20 cities in America to get a job.

Fortune Magazine combined Bureau of Labor statistics with recent Census data to compare the nation’s 100 largest cities.  According to the report, Boise has an unemployment rate of 3.8%.  The “City of Trees” ties with Portland, Boston, Tulsa, Irving Texas and Gilbert Arizona.

Capital Group reached out to Boise City leaders to learn some of the secrets to a low unemployment rate.  Nick Miller, Director of Economic Development at City of Boise, says “Our city has a mission to become the most livable city in the country. This focus on livability has made our city attractive to a highly-skilled workforce and businesses that see an opportunity to grow.”

Statewide, Idaho’s unemployment stands at 3.9% for May 2015, well below the national average of 5.5%. According to the Idaho Department of Labor, “It’s been just under one year since any of Idaho’s 44 counties reported a double-digit unemployment rate. As economic conditions improve across the state, 24 counties had rates at or below the statewide rate (in May of 2015), four more than last month.”

In 2010, during the aftermath of the recession, Boise had an unemployment rate of 9.8%

“Our city leadership has worked to streamline the business processes in order make opening or expanding a business in Boise as easy as possible,” Miller said.  “We also work with the Idaho Department of Commerce and Boise Valley Economic Partnership to bring in projects such as SkyWest Airlines (maintenance facility) and Diversified Fluid Solutions.”

In addition to working to attract companies, community leaders are also attempting to help new businesses get off the ground.  Miller pointed to the recently-opened “Trailhead,” a collaborative professional space for entrepreneurs, innovators and business people of all types.  It was developed in a partnership between The City of Boise, Capital City Development Corporation, Micron, and three local entrepreneurs.  “This co-working space will serve as the center of Boise’s growing entrepreneurial ecosystem,” Miller said.

The economic strength in Boise has resulted in a hot housing market.  Forbes Magazine ranks Boise #8 on their list of the top 20 cities for real estate investment in 2015.

Miller, the city’s Economic Director, also points to quality of life as a big factor in the city’s growth.  “The lifestyle of Boise is what draws new residents,” he said.  “This includes the Foothills and greenbelt; a vibrant arts and cultural scene; a thriving downtown and diverse neighborhoods; excellent secondary and post-secondary education; and the ability to live an urban lifestyle while still having the natural amenities that the West is so well known for.”

Looking for an apartment, home or investment property in the Boise, Idaho area?  Call Capital Group today at 208-639-1717 and let our team help you!